Meyer Family Cellars is unique among California wineries in the range of its production, which is divided evenly between site-specific wines from both Mendocino County, where the winery is located, and Oakville, one of Napa Valley’s—and the world’s—premier growing regions for Cabernet Sauvignon. Within Mendocino, we access carefully farmed grapes from two sub-appellations: the Yorkville Highlands and Anderson Valley American Viticultural Areas (AVAs). 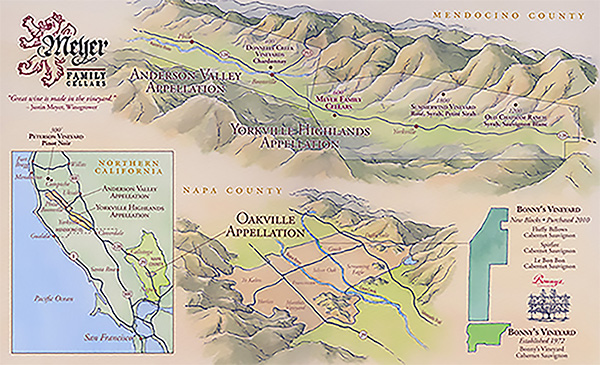 Just over the hills and mountains from the northwest corner of Sonoma County—home to some of California’s brawnier reds—the wines produced in the picturesque Anderson Valley serve as a counterpoint to their neighbors’ to the south. Known since the 1970s as a growing area well-suited to Alsatian grape varieties like Gewurztraminer, Pinot Gris, and Riesling, not to mention excellent méthode champenoise sparkling wines, Anderson Valley has taken on a more focused identity over the last two decades, thanks to the elegant, restrained Chardonnay grown there, along with some of the West Coast’s finest Point Noir. Both noble varieties work as ambassadors for California’s quintessential, cool-climate region. Recognizing this, it’s no surprise that Matt and Karen Meyer have elected to partner with artisan growers of each and produce vineyard-designate bottlings under the Meyer Family label.

To quote one of our retailer customers, “the Oakville name is synonymous with excellence in winemaking” and is “a viticultural treasure” among the many fine Napa Valley AVAs. This narrow band of vineyards that slices across the central part of the Valley, from the Vaca Mountains on the eastern side to the Mayacamas range on the west, is, first and foremost, associated with world-class Cabernet Sauvignon.

Oakville’s unique combination of well-drained, sandy-gravelly soils and the cooling effects of fog and breezes from the San Pablo Bay—not mention the stellar reputation of its wines—have earned this tiny section of Napa Valley the status as California’s most revered viticultural area. The Meyer Family has farmed and produced Cabernet Sauvignon from Bonny’s Vineyard in the heart of Oakville since the mid-1970s, and over that period of time they have contributed significantly to both the reputation of the Oakville AVA and the definition of its red wines.

The Yorkville Highlands appellation consists of approximately 40,000 acres straddling Highway 128 between the Alexander Valley to the southeast and Anderson Valley to the northwest. The vast majority of Yorkville Highlands’ vineyards are planted on a continuous string of bench land between 1000 and 2200 feet in elevation; largely planted to Cabernet Sauvignon, Syrah, Pinot Noir and Merlot. As the warm afternoon air begins to turn hot, cooling breezes blow up into the region from the nearby Pacific Ocean. The benchland vines benefit from this cooling effect, which protects the fruit from over-ripening and causes some of the coldest evening temperatures along the North Coast. These frigid nighttime conditions are essential for preserving grape acidity. The moderated temperatures allow for an extended growing season, with the majority of the fruit being picked late in the season. Mature tannins in the red wines are the result; they are long and complex without being overpowering. Most winemakers of the region agree that Yorkville Highlands fruit can ripen evenly, with acidity, structure, and richness balancing each other in the wines of the appellation.

Yorkville Highlands’ soils also play an instrumental role in grape development. The gravel and ancient, brittle rock characteristics found in the thin soils on the high benches force the vines to dig deep into the soil. This poor and gravelly soil type probably explains the mineral characteristic of many Yorkville Highlands wines. In the two decades since its founding, the Yorkville Highlands’ growers and vintners have learned a lot about viticulture in the region. They are creating unique, site-specific wines that are beginning to capture the attention of both wine lovers and critics. With their combination of “old world” balanced acidity and minerality, along with “new world” ripeness and forward fruit, the Yorkville Highlands appellation is one of California’s most exciting viticultural areas.